The House’s decision Friday to defund the abortion giant, Planned Parenthood, was celebrated as a small victory for pro-lifers everywhere, including me.  They also passed H.R. 3504, which would make killing a baby born alive during a botched abortion a first-degree murder offense.  I rejoice for these decisions, but it is also a sad testimony to how far our nation has strayed from biblical principles and values.  Why would men and women even have to vote to stop sending our tax dollars to fund an organization that rips apart babies in the womb and sells their parts for profit?

It’s a straight line from God being removed and self put in His place, to the disregard for the sanctity of life that was created in His image.  Proverbs 8:36 says, “All those who hate me love death”.  When self becomes a god, a disdain for children, and mothering in general, naturally follows.  This attitude has not only infected our culture, but sadly, the church as well.  The reigning ideology today insists that a mother determines whether or not she wants to be one, and whether or not she perceives a child worthy of life, even as it develops in her womb. She makes these decisions at an incredibly emotional and vulnerable time, with the support of a prevailing belief that there is empowerment in ending that child’s life within her.  This has been, in fact, defined as her constitutional “right”.

In the last 40 years, the feminist movement has done a very good job of persuading women that they should be ashamed and even fearful of traditional women’s roles.  Motherhood is not celebrated or embraced in our post-modern culture.  Instead, it is reviled.  In fact, I have heard other women boast that “I’m a mother and personally pro-life, but politically pro-choice.”  The truth, though, is that defending the “right to choose” is incompatible with motherhood.  A mother, by definition, nurtures life- whether she births a child or adopts one.  She does not destroy, nor does she support the destruction of a life.  You can’t advocate for someone to be able to terminate their offspring without simultaneously undermining your own importance as a mother.  Abortion and motherhood, contrary to what modern feminism tells us, are mutually exclusive.

Even in the best of circumstances, motherhood demands your all.  You give up control over your time, your finances, your needs and your wants to put those of small children’s ahead of your own.  The giving up of ourselves on another’s behalf is the very essence of mothering.  It isn’t always easy.  It definitely isn’t always fun.  It is certainly not a popular idea in today’s self-absorbed, self-serving culture.  Abortion, on the other hand, embodies everything that is diametrically opposed to self-sacrifice.  It is the result of the radical feminist thought that women only find meaning and happiness through the personal pursuit of autonomy and freedom.  It is marketed as a way for women to liberate themselves from anything that makes them feel morally obligated to someone else.

I have experienced the sheer panic which accompanies the realization that you now have the soul-crushing responsibility of a brand new baby.  Even as my son grew older, I experienced fleeting moments where I thought my world was crashing down around me.  Just when I thought I had mastered those, I gave birth to my daughter and experienced that same all-consuming feeling of fear.  Only this time, it appeared to double since I had the responsibility of both a toddler and a newborn.  How much more must this fear be for women whose pregnancies are unplanned, who don’t have the support of their baby’s father?

Fast forward to present day, and my children still regularly trample on my freedoms.  My right to privacy is infringed upon by their barging into the bathroom without knocking.  My right to peace and quiet is walked all over by a seven-year-old asking questions that stretch down around the block and back, the shrieking of a three-year-old, fights over toys, songs being sung at the top of my kids’ lungs, and the list goes on and on and on.  My right to my own body was infringed upon by a tiny baby taking up residence inside of it on two separate occasions.  Then there’s the right to advance my career or financial status, which I basically kissed goodbye when I became a stay-at-home mom.  My world revolves around the constant needs, wants, and demands of small children who have absolutely no regard for what I gave up for them.

All of this can feel awfully threatening if I lose sight of the fact that Jesus gave up His rights as Lord and King, when he came to earth and lived among needy, dirty people who demanded all He had to give.  He was entitled to glory, honor, and praise, but He laid it all down for us.  “Who, being in very nature God, did not consider equality with God something to be used to his own advantage; rather, he made himself nothing by taking the very nature of a servant, being made in human likeness.  And being found in appearance as a man, he humbled himself by becoming obedient to death- even death on a cross!”  (Philippians 2:6-8, NIV)

He made Himself nothing.

It’s that kind of self-sacrificing love which inspires me to serve not only my children, but others around me who are in need of grace.  It is that perfect love which drives out fear- the fear of losing myself in motherhood, of being required to give up too much and get little in return, even of giving up control over the way my kids turn out.  When we have a relationship with Christ and understand His sacrifice for us, we bring everything under His lordship.  Everything we are holding onto so tightly we are then able to let go of and entrust to Him.  We let Him order our steps and faithfully give up that which we feel we are entitled to.

I am not my son or daughter’s god; I am their mother.  They ultimately belong to the Lord, and I have simply been entrusted with their care.  As a mom, I carry out God’s purposes.  Even with all my failures, if I am obedient to the calling of loving and protecting them, I can confidently leave the results to Him.  When I understand my role in its proper context, I can parent without guilt or anxiety.  If I believe that it all depends on me, I will not make life affirming choices, but ones based on fear and self-preservation instead. 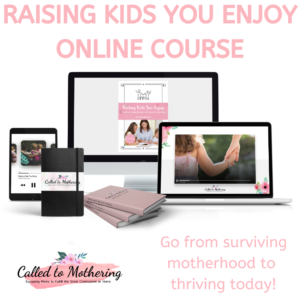