“Where will the light be if all the godly kids are pulled out of public schools?”

That question seemed to settle the argument. An old friend from college had responded to a comment I made that it is unwise to place children in an environment that teaches a humanist, anti-biblical worldview for 30 hours a week.

She seemed to agree that the public school system today is a rather ungodly one, but then asked the loaded question above.

It is one that many Christians have wrestled with over the past several years, as American schools continue to deteriorate both in morals and academics. In 2002 the Southern Baptist Convention, even armed with the research saying that 70-75% of Christian youth leave the church after high school, couldn’t put the question to rest.

But perhaps we are trying to settle the wrong question.

Instead of asking, “where will the light be if all the godly kids are pulled out of public schools?”, we should be more concerned with where the light inside of godly kids will go if they are not.

Matthew 5:13-16 does not say go be salt and light. It says we are salt and light. Jesus warned that we must be careful not to lose our saltiness and therefore become useless. In order to maintain a witness, Christians must also be set apart and distinct like a light on a hill.

Children by their very nature are extremely vulnerable to influence, both from their peers and from adults. Considering the toxic nature of the public school, their light and “saltiness” are threatened with being extinguished and ruined. 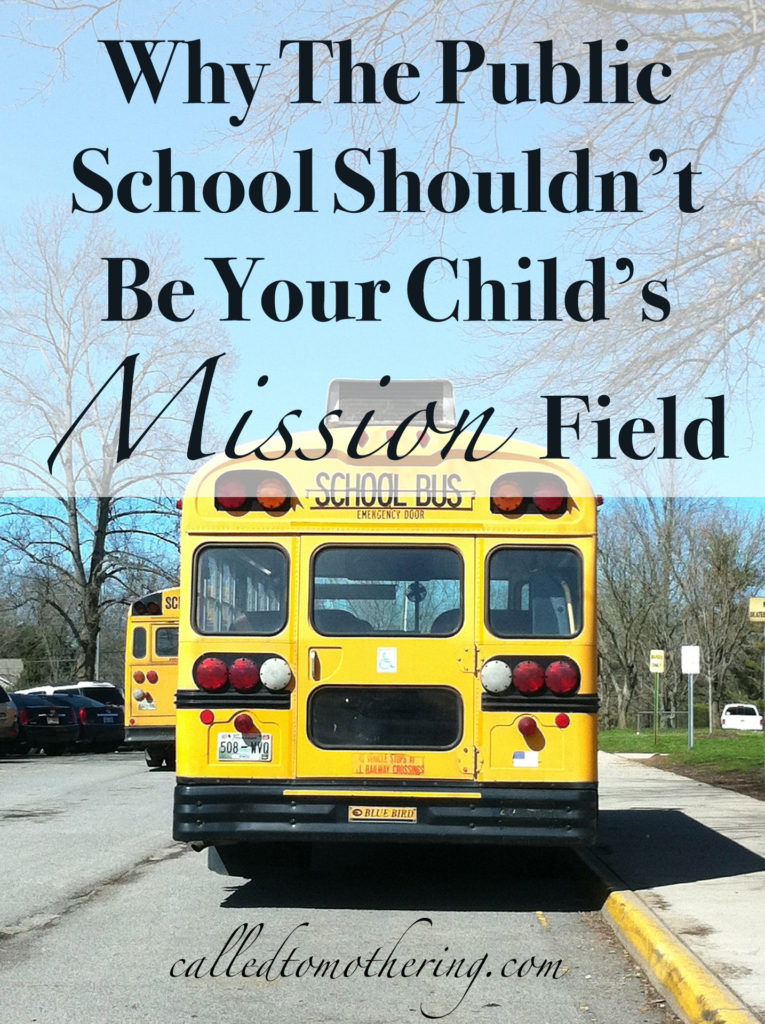 Immersed in an environment that trains children in a secular humanist worldview for 14,000 hours over 12 years, it is highly likely they will be converted the other way. Secular Humanists understand correctly that the culture war will be won through education: “Education is the most powerful ally of Humanism, and every American public school is a school of Humanism”, wrote Charles Potter, the author of Humanism: A New Religion.

1 Corinthians 15:33 says, “do not be deceived: bad company corrupts good morals”. If fully mature believers are in danger of being corrupted by others’ bad influence, how can we expect highly impressionable children to escape the same outcome?

Kids aren’t small adults. They can’t filter out hyperbole and half-truths like grownups can. They are not capable of rejecting anti-biblical notions on their own, because they haven’t developed critical thinking skills yet.

The Old Testament is filled with case studies of what happens when God’s people surround themselves with a pagan culture. Over and over again, they are corrupted by the culture’s idol worshipping practices. How is it that we expect something different for kids whose faith, not to mention brains, are still developing?

Now while it is certainly true that the Spirit acts as our children’s protector, this protection is not an excuse to be foolish and irresponsible. In the desert Satan tempted Jesus with throwing Himself down off the pinnacle of the temple, because “He will command His angels concerning you’; and ‘on their hands they will bear you up, so that you will not strike your foot against a stone.’ ”

Did Jesus do what the devil said? Of course not! He answered him, “On the other hand, it is written, ‘You shall not put the LORD your God to the test.’ ” (Matthew 4:7, NASB) We focus so much on the fact that Jesus is our Shepherd that we forget He is also the Lord whom we must submit to.

The public school isn’t the only place where our children will run into the lost. They can still shine the light of Jesus out in their communities at the store, in restaurants, at the playground, and during extracurricular activities.

Families can be salt & light to others together, instead of being separated from one another for most of their waking hours during the week. If you want missionary opportunities for your children, volunteer at a children’s hospital. Take meals to your elderly neighbor. Organize a clothing drive. Serve at a soup kitchen.

The Book of Acts gives us example upon example of houses converted to Christianity. The parents, usually the father, became disciples first and then led the rest of their household to Christ. In not one instance is the child proselytized against the wishes of the parent, and children are never the focus of a conversion campaign.

I get that reaching kids with ideas while they are separated from the authority of their parents is a way in which Christians attempt to redeem compulsory education, but doing so is a direct affront to the institution of the family that God designed. What many fail to realize is, humanists are taking the same advantage of this absence of parents- and getting much better results!

Claiming to serve the Lord and then sending our kids off to schools where He is not plainly, fully, and publicly honored is a disaster waiting to happen. There is a big difference in sending fully trained disciples into enemy territory and sending recruits to our enemy’s training camp. If we do the latter, we should not be at all surprised when they come home waving the enemy’s flag.

For more information on the topic of Christians in the public schools, check out Bucking The System: Reclaiming Our Children’s Minds For Christ.