“Look, buddy! I got a baby Jesus one and you got a Christmas one!”

Our kids had just opened their annual Advent calendars from Grandma. My daughter’s depicted a scene straight out of Luke 2, with shepherds, wise men, Jesus, Mary and Joseph. My son’s featured Santa’s workshop complete with elves, toys, candy canes, reindeer, and a sleigh.

My baby girl’s excitable, innocent statement to her brother spoke volumes in that moment. At five years old, she had already surmised what she thinks Christmas is all about: the brightly colored, jolly Santa who delivers presents, not Jesus in the manger.

This mama wanted to do a face palm.

We’ve done the Santa thing in our house since my son was two. And not just the pretending that he comes down the chimney on Christmas Eve and leaves presents under the tree.

We’ve done the whole charade– standing in line for an hour to get a picture with the big man in red, racking our brains for creative hiding places for Elf on the Shelf, even sprinkling coffee grounds on the kitchen table to make it seem like the reindeer put its hooves up on it to eat the carrots that were left out with the cookies & milk.

Now I was beginning to regret those decisions. I had already been feeling uncomfortable with the idea of Santa, even before my children received their much coveted Advent calendars. 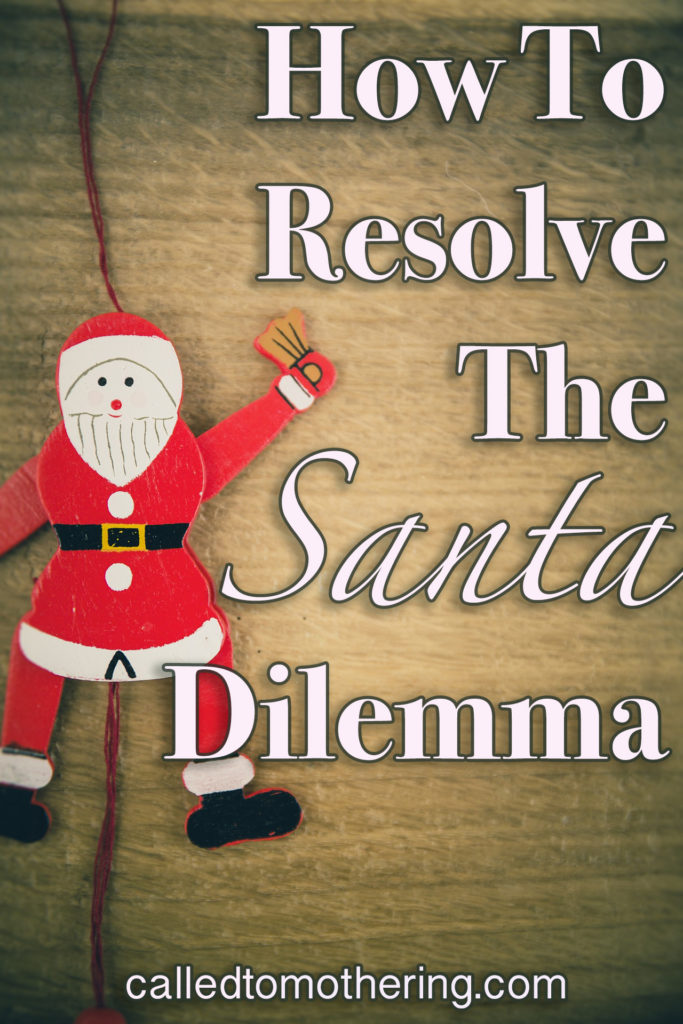 The more I strive to create a Christ-centered home, not only at Christmastime but throughout the year, the more I think Santa Claus is inconsistent with this goal. When my kids start to care more about the toy elf watching and reporting their behavior to some mythical man who brings them presents, instead of a real holy God who has the power to save souls, I’ve got a problem.

And the more I dig in, the more I realize that so many elements of this fantasy unintentionally send the wrong message to my children.

Much of what Santa represents flies in the face of the Gospel.

Obviously, the whole naughty and nice list conveys the idea that you have to be “good” to get presents. That is the exact opposite of salvation- we did nothing on our own to earn this gift precisely because that’s what a gift is. You don’t get one based on your behavior. It is unmerited.

And exactly how good do you have to be? The concept is highly subjective. If we’re teaching our children that there is “none righteous”, then this becomes confusing. The whole crux of Christianity is that we can’t ever be good enough to earn our way into Heaven. Jesus was good for us; all we have to do is receive this free gift (Ephesians 2:8).

The belief in Santa encourages a belief in “harmless magic”.

Magic is an essential component of the Santa act. How else do reindeer fly and a mere man able to visit all those houses around the world in one night?

As a general rule we do not allow our kids to watch or read media where the hero/good guy practices magic, or that portrays magic as morally neutral. Deuteronomy 18:9-13 is pretty clear that we shouldn’t have anything to do with sorcery, witchcraft, or casting spells. It seems contradictory then, to say that Santa doesn’t fall into this category.

The real “magic” of Christmas doesn’t involve magic at all; it involves a miracle. Emmanuel’s humble birth in a stable contains more than enough wonder for us and for our kids to marvel at.

The real “magic” of #Christmas doesn’t involve magic at all; it involves a miracle.

To keep up the idea of Santa, we have to keep perpetuating a lie.

In order to keep up this charade, there is just no other way around it. In our house we say we value honesty, but then we lie our pants off the whole month of December. And for what reason- to please our children?

When they eventually discover the truth, it could possibly discredit our trustworthiness as parents. And worse, discredit everything we’ve said about God. 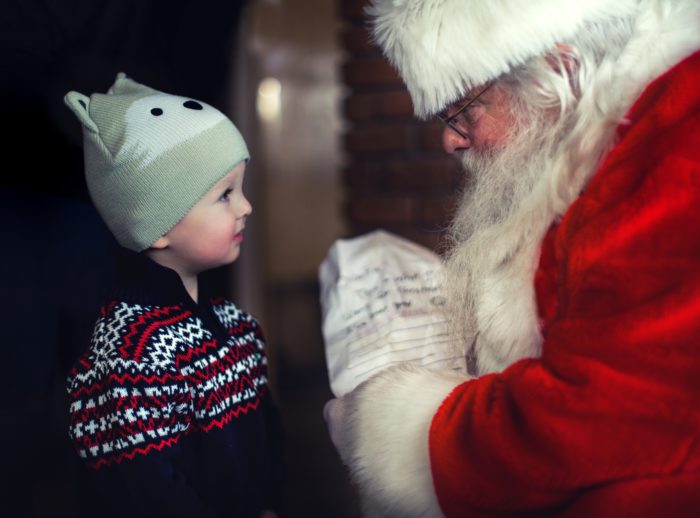 So the other day when my son started asking questions about Santa because of what he heard a friend say in Sunday School, I knew what I had to do.

My eight-year-old looked me in the eyes and said, “Mommy, tell me the truth.” In that moment, I could either protect the myth and keep up the illusion, or I could be honest.

So I chose honesty. No dancing around the truth. No sugar coating.

And he was fine. His sister too.

I explained I had been pretending something was true without them and that I realized it was wrong. Then I humbly asked for their forgiveness, which they promptly extended. I also assured both of them that they would still get presents Christmas morning.

That afternoon I chose to do what I did because I realized Saint Nick and the Son of God were actually in a competition for my kids’ focus at Christmas, and the one that should have been “winning” was definitely being edged out.

In our home, Jesus and Santa cannot exist side by side together like those two Advent calendars on the wall.

What do you think? Is Santa just a harmless tradition or a distraction from the true meaning of Christmas?