I applaud them for recognizing that our nation’s schools have become spiritual battlegrounds, in a sense. The video they presented was shocking, full of troubling statistics on the number of children bullied, engaged in promiscuous behavior and violence, using drugs & alcohol, and failing classes.

It seemed like the video, intended to show that schools need to be evangelized because of just how bad they’ve become, also showed exactly why our kids have no business being there.

This has become the Church’s blindspot in winning our culture to Christ. Families no longer train their children to defend their faith, but send them unequipped to the very place that will teach them an anti-biblical worldview.

With statistics saying 70% of kids involved in youth groups are walking away from the church within two years after high school, shouldn’t we consider that maybe while they were in there, they became converted to secularism?

We disregard the multitude of clear scriptures on the education and sheltering of children in favor of one passage that is misunderstood and misapplied. The “salt and light” argument finds its source in Matthew 5:13-16.

But, as with any Scripture, we have to know its context so that we can correctly apply it. The consequences of failing to do this can be, well, disastrous.

The “salt & light” argument starts to fall apart upon closer examination. Here are 10 problems with using it in favor of sending kids to public school. 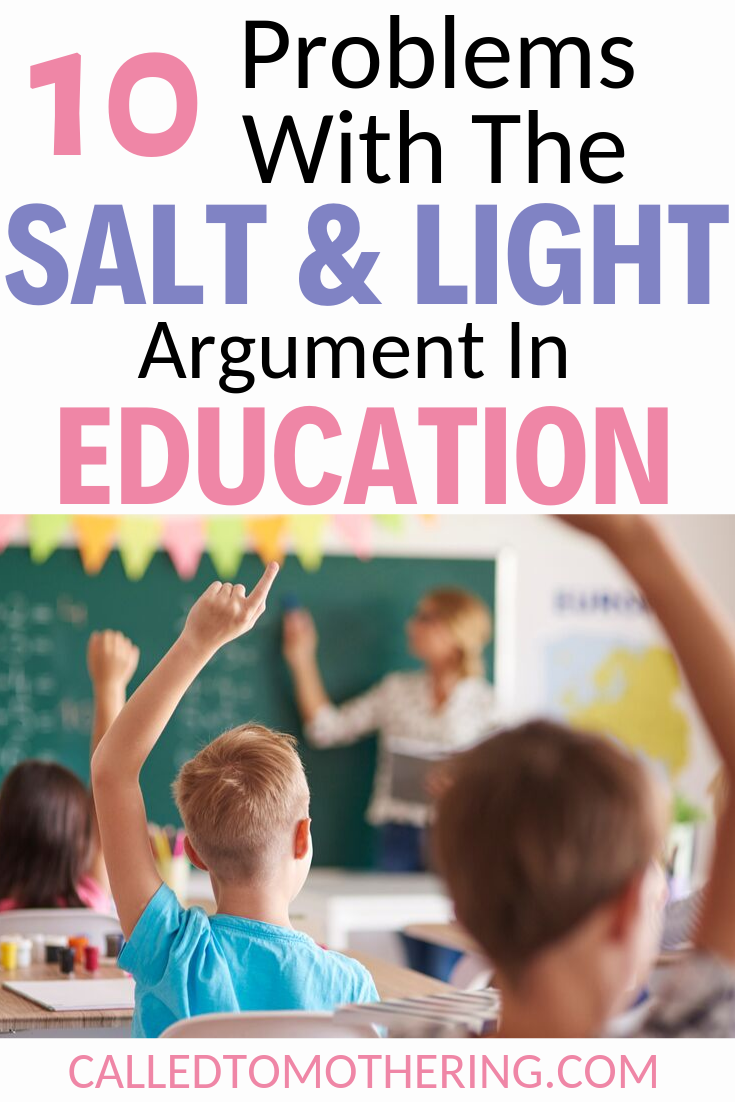 It says we are salt and light. Christians already are light to this dark world; they are not called to join the world in their darkness.

In fact, the Christian school is a very bright light to the darkness of secular education. Unbelievers ought to see the academic and moral excellence of Christian private schools and Christian homeschoolers, and be attracted to such education.

Education is a hot topic in the news, and everyone is looking for a solution to the educational chaos of our day. Let’s show them by example what true education looks like. We may win them over not only to our schools, but also to the Christ who reigns over our schools.

These are qualities that little children simply do not possess. Although your child may actually be saved by the grace of God through the Gospel, he or she is incapable of being biblical “salt and light” to anyone.

They are in dire need of being exposed to such biblical salt and light themselves – which Christian parents are commanded and equipped to provide through obeying the Word in every area of life, including the realm of children’s education. This is exactly why God has lovingly instructed us to protect them while they are children so that they might by His grace, through our obedience, be allowed to grow into adults who do possess these qualities.

Sending them off to a place where the Gospel is prohibited from clear acknowledgment, much less detailed presentation and repetition, while there is constant interaction with fellow sin-enslaved children (and teachers) is a recipe for disaster. Such an environment is the perfect incubator for anti-Christian worldviews.

We usually ignore verse 14 of Matthew 5, which says “but if the salt becomes tasteless, how can it be made salty again? It is no longer good for anything, except to be thrown out and trampled…”

Jesus provides an important caveat here. He is giving us a warning that we can become spoiled, and therefore ineffective as witnesses. Because of their nature, even born again children are extremely vulnerable to ruination. 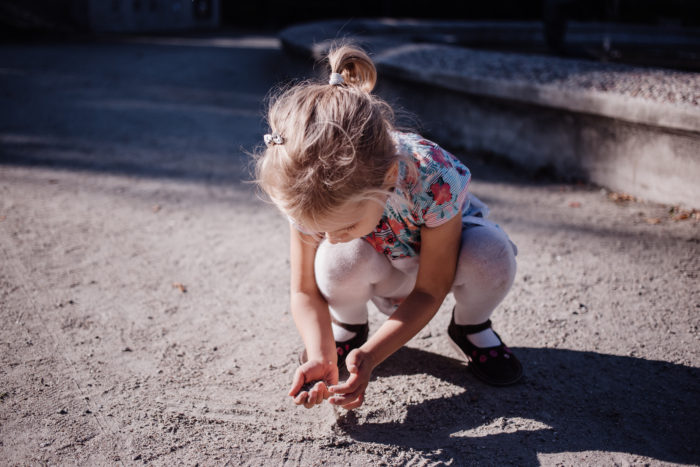 They can’t rightly make disciples. Oh they may be able to make converts, but this isn’t the same thing. Making disciples requires leading another to follow Christ and teaching them everything Jesus commanded to obey. Children aren’t leaders; they are entrusted into the care of adults (hopefully godly ones) who will shepherd them.

There are missions trips that kids participate in, but even on those children are supervised and guided. They are not sent out alone. Why?

5) The requirement of attending any school is that kids are “fed” by someone.

There’s just no way around this. Children’s nature is such that they have to grow in instruction, and so they have a great appetite for learning. As Charles Spurgeon wrote, “they must be well fed or instructed, because they are in danger of having their cravings perversely satisfied with error. Youth are susceptible to false doctrine.”

All children sent into a godless education system are going to be purposefully fed a worldview that will further cement and encourage their rebellion against God. They take in the spiritual “junk food”, as well as any healthy stuff, without filtering any of the garbage out. 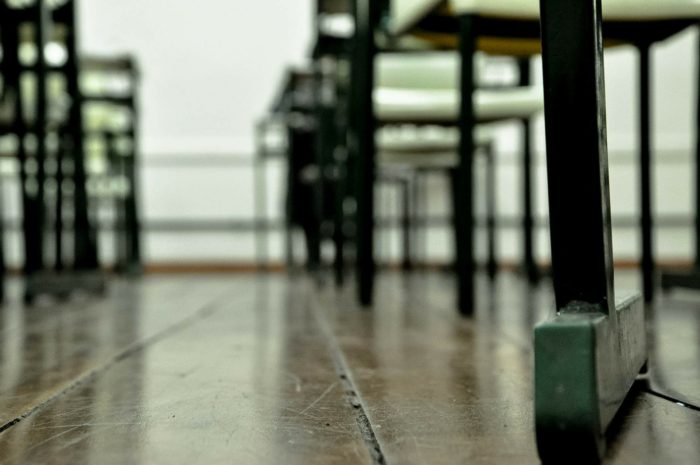 6) Immature young professing Christians are to be protected from satanic worldviews, not immersed in them.

Knowing that children are prone to believe false doctrine, God, in His infinite wisdom, instructs parents to personally strive to see to it that their children are being trained in an explicitly God-centered manner throughout each and every hour of each and every day. This hedge of Deuteronomy 6 is lovingly presented by a Lord who desires that His people have what they need to raise their impressionable, immature, sinful little ones into God-fearing, wise, responsible men and women.

Does Jesus’ commandment in Matthew 28 to make disciples of all nations override the injunction to parents in Deuteronomy to teach their children to “love the LORD your God with all your heart and with all your soul and with all your might”? If so, wouldn’t Deuteronomy 6 go something like this: Teach your children so that they may go be salt and light to the Canaanites and all the surrounding pagan nations?

7) Kids are fighting a battle against an enemy they’re not ready to face yet.

Schools are spiritual battlefields. This is where foundations are laid. This is where worldviews are formed, without any recognition on a child’s part of how and when. And secular humanists understand this all too well-

I am convinced that the battlefield for humankind’s future must be waged and won in the public school classroom by teachers who correctly perceive their role as proselytizers of a new faith: a religion of humanity… – John Dunphy, “A Religion for a New Age”, Humanist, Jan.-Feb. 1983, pg. 26

Schools are therefore no place for us to send our unprepared, ungrounded, and often unsaved children. To send off vulnerable and malleable little children into this system designed to tear down the Christian worldview- in the hopes that they might win spiritual battles just because they might have asked Jesus into their hearts- doesn’t make sense.

A soldier needs to train extensively for combat and understand the enemy’s tactics before he is ready to fight. Likewise, children need time to be nurtured, discipled, and matured before fighting battles against the darkness in the world. They need time to sink their roots deep down into the soil of their faith before combatting the pagan philosophies saturating our nation’s schools.

8) Unsaved classmates and teachers are not neutral.

They are “slaves to sin” (Romans 6:17). They hate holiness (Romans 1:30). And they love loving sin and hating holiness. That’s the nature of man apart from Christ. That’s why they need a Savior.

Both groups have tremendous influence over impressionable children.

If God’s commands have been taken out of public schools, it leaves a vacuum for worldly wisdom to rise up in its place. It is hardly ever the individual teacher who purposely teaches humanism. It is the underlying worldview of humanism, however, that must be taught in the absence of God.

When we try to educate children apart from the knowledge that God created all things, established truth and fact, and is the foundation of wisdom, we not only can’t educate properly, but we teach that man is the source of truth and knowledge. Unsaved teachers are going to teach and influence the children in their care to hate holiness, whether they know it or not, believe it or not, and intend to or not. 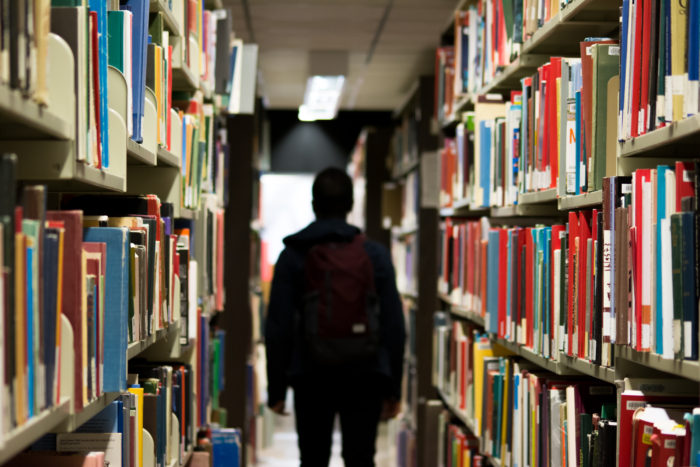 Forget the caricatures of flagrantly bad teachers that increasingly populate the headlines of newspapers and online news sites. Pedophiles and alcohol abusers are obviously a terrible threat to children and young adults, but it is the “nice” men and women in the system who can actually be the most dangerous.

The presentation of this path to being a “good person” without the saving knowledge of Christ is one of the most persuasive- and therefore dangerous- threats to an unformed child’s mind and worldview. The hallmark of secular humanism is that goodness, respectability, and success are attainable apart from submission to the Lord.

So it is that “nice teachers” become particularly effective tools of the enemy in this environment.

10) There is little evidence that kids being “salt and light” at school is effective.

According to Smith and Denton’s Soul Searching research (the largest-ever survey of U.S. teens ages 14–18), “We found the vast majority of [U.S. teenagers] to be incredibly inarticulate about their faith, their religious beliefs and practices, and its meaning or place in their lives. . . . Mainline Protestants were among the least religiously articulate of all teens.” (p. 131)

That takes us back to the 70% that are leaving church after high school. The time spent at home and church did little to stem the tide of secular training they received in the public school. Once they were out from under the watchful eye of mom and dad, they defaulted to the worldview they had been exposed to the most during their youth. 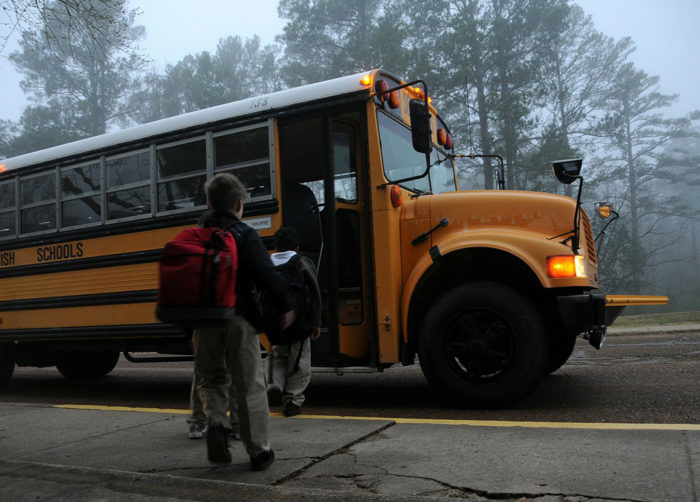 The salt and light argument seriously underestimates the power and volume of the messages—intentional and unintentional—that are conveyed hourly in a public school setting. Even in the best cases where a child is well-equipped and effective, parents are trading off the opportunity for their child’s biblical training and worldview development when they remove them from Christian education.

Give your kids a solid biblical education as their foundation, and when they mature, they will be able to thrive as Christians in our secular culture — rather than limp along like so many of our young people today.